Puerto Natales – Chile Bound And Down

Leaving El Chalten, we spent a night in El Calafate before heading Further South (and west) with a six hour bus ride to Puerto Natales, Chile. It’s actually a five hour bus ride with an hour at the border while they check out your luggage for meats, cheeses and veggies or whatever other contraband you might have.

Puerto Natales itself seems a little sad or drab. Probably because even during the height of summer it’s weather that most would consider chilly. Also lots of grey clouds, though we were treated to some spectacular shows one evening of our stay.

We rented an apartment near the bus station. Our hostess spoke almost no English, we speak precious little Spanish, and for whatever reason the version of Spanish they speak in Chile, particularly way, way, way south Chile is harder to understand than the Carioca Portuguese of Rio. But we made it all work. She left us some nice bread, meat and cheese for breakfast, on which I slathered some beer-dijon mustard we picked up in El Calafate. In future days she went crazy and brought in like four hockey puck sized chocolate covered cookies and near pie-sized tarts. More than a family of five could eat in a weekend, let alone a pair of turistas in a day. Not complaining, mind you. Happy to have a hostess competing with our buddy on the HMS Luctor in Amsterdam on who could bring their guests the most food. 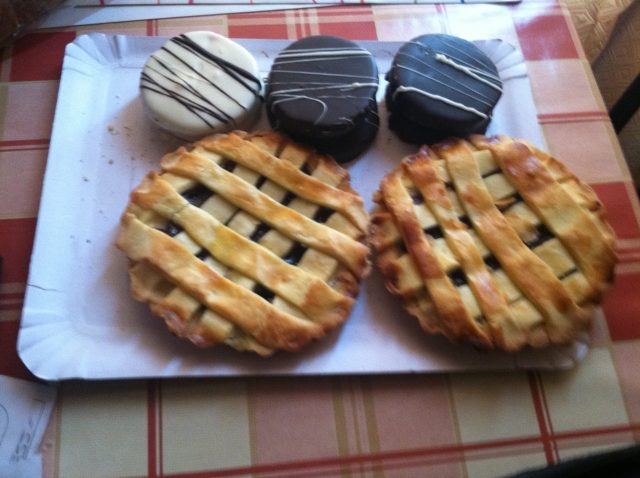 The chocolates (one missing) are larger than hockey pucks. More food than we could want.

Toured the town the first day. Nice 15 minute walk into the “happenin’” part of the city. Took some time to check it out, eat lunch at a cheap (for either Chile or Patagonia) local place. Sadly they were out of pil-pil (my fave Chileno dish), but settled for a steak and seafood soup. Really good stuff. Converted some money – not in a cambio like we’re used to, but some blazing hot home office. Found Baguales, a craft beer place. Ok food, but some really good cerveza.

Our first full day in town wasn’t actually in town. We booked a bus trek to Torres Del Paine national park. HUGE park too big to take in on foot. Bus enabled us to see an awful lot of it, including a couple beautiful lakes arrayed in front of the mountains, a waterfall, a picnic lunch on a lake (most paid up for a restaurant. We were cheap, packed our own thanks to our awesome hostess, and dined lakeside instead), and later dropped us off for a nice hike to a glacial lake which featured buffeting, freezing winds when near the lake. Didn’t get to take in as much of the park as we’d have liked, but was still wonderful to behold.

Last day in town saw us relax (well me = work ) the morning away before heading into town in the afternoon to hunt souvenirs, enjoy more beers (see Libro Bar scenario, again, only without more Hemingway to read) and another visit to Baguales. Held off on dinner in the hopes of scoring a completo (the Chileno hot dog with all the fixings, if you’ve watched Gringolandia you know what I’m talking about) but they were out.

Enjoyed our trip to Chile but feel slightly sad that I scored neither pil-pil nor completo.

i am from arizona, lived three years in asuncion and now reside in bogota. i am married. have a limited budget, but like to travel. i also like beer. and food.
View all posts by perducci →
This entry was posted in Travels and tagged Chile, Patagonia, Puerto Natales, Torres del Paine. Bookmark the permalink.

1 Response to Puerto Natales – Chile Bound And Down